The Saint Louis Brewery is facility that makes Schlafly Beer. The brewery is the largest locally owned and independent brewery in the city of Saint Louis. At its pre-Prohibition peak, the city had over 120 brewpubs. Three reasons in particular make Saint Louis a great beer city:

The history of Schlafly is tied to the history of craft beer in Missouri. Tom Schlafly was the man with the image for a new craft brewery in Missouri. As an attorney, he worked to change the state laws that dated back to Prohibition. The restrictive legislation made it more difficult to open a brewery and distribute beer. Schlafly opened in December, 1991. Beer flew off the shelves so quickly that they ran out of beer in the first few days of January 1992. Luckily, Tom’s work advocating for the new regulations on beer in Missouri paid off. Down I-70 in Kansas City, Boulevard Brewing Company was willing to lend a helping hand since they benefitted from Tom’s advocacy. They sent Boulevard Porter down to Saint Louis for Schlafly to sell while they worked to brew more beer. To this day, Boulevard Porter is the only non-Schlafly beer ever served on Schlafly property. Missouri breweries stick together. A listing of their 2017 offerings is diagrammed here:

The Saint Louis brewery is the first brewery in the United States to work with Australian hops growers. This is commonplace with many breweries now, but Schlafly was revolutionary in this quest. They are also the second brewery in the world that can say they are making an authentic, German-style Kölsch because they use the correct yeast strain from Cologne, Germany. Tom met his wife in Germany on a trip and learned that she was actually German royalty. After being bothered from his in-laws wondering when he would brew a Kölsch, he was gifted the specific yeast that qualifies it as genuine.

The tour was very well done. After donning safety goggles and feeling like a real-life brewer, guests walk through the empty brewing facility to see each stage of the brewing process. At the end of the walk through the brewery, the tour ends in a special tasting room with a bar which is used mainly for tours. The tour guide fills pitchers with 3 or 4 recipes and offers taster-sized pours to all visitors. 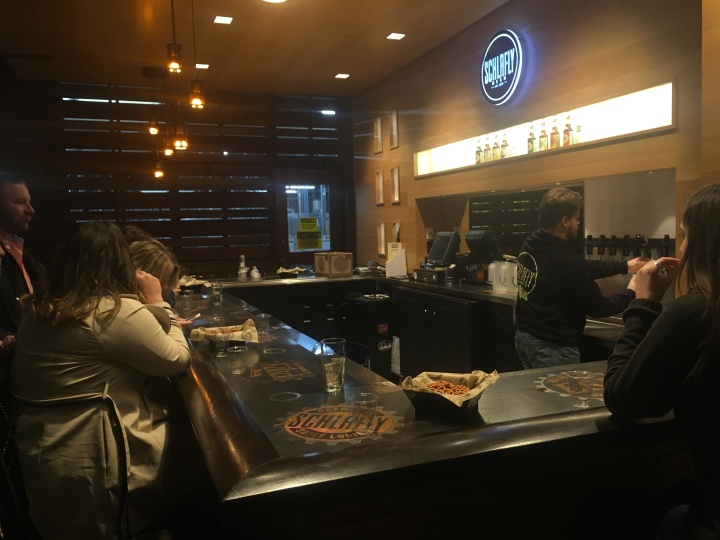 GUIDED TOURS OFFERED: Unique schedule based on which location you want to visit. Visit this website to learn more about times.

THREE WORDS TO DESCRIBE THIS BREWERY: Authentic, Advocates, and Respectful